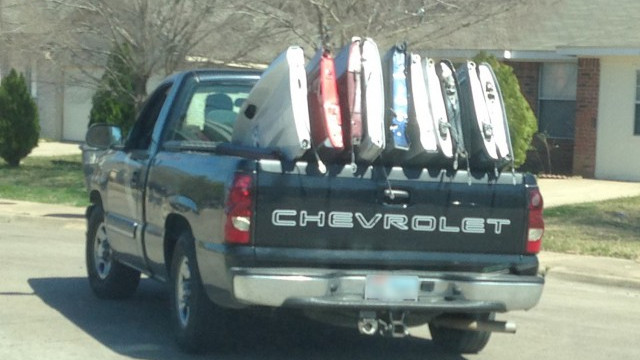 It’s common knowledge that people will steal anything. If it can be sold, it can be stolen. Even truck tailgates. You would think that stealing a tailgate would be something akin to stealing a car door. Not so. Even car dealerships have had to deal with this phenomenon. Here are some surprising statistics:

According to the National Insurance Crime Bureau (NICB), tailgate thefts have declined slightly between 2014 (1,895) to 2015 (1,787), they are still up over 400 percent from 2010 (430). Bear in mind this report is based on insurance claims; therefore, the actual number of tailgate theft incidents may be considerably higher since many thefts do not generate an insurance claim.

Anyone who owns a truck knows tailgates aren’t cheap. A quick Google search showed a tailgate for a 2012 Ford F-150 costs around $300 (that’s at a parts place, not a dealer.). Get one stolen off your brand new Dodge Ram? Get ready to shell out around $600, not including any accessories. If there any electronics connected (like a back-up camera), double that figure. Custom tailgate? You know what it’s worth.

Tailgate thefts can occur anytime and anywhere. If you are just running in to the store for a minute, you tailgate can be carried away in seconds. Even if it is not sold as a spare part, it can be scrapped for cash. If you have a truck, you might want to consider using an after-market security device, such as a hinge lock. At least back up your truck to a wall or a pole so it can’t be opened.

Most truck owners are unaware that their tailgate can be targets for thieves. Of course, it is best to find out now if such a theft is covered by auto insurance. Consult with your insurance professional to find out.

Made with by UnikoMedia.com.
© 2015 Right Way Auto Insurance. All Rights Reserved.